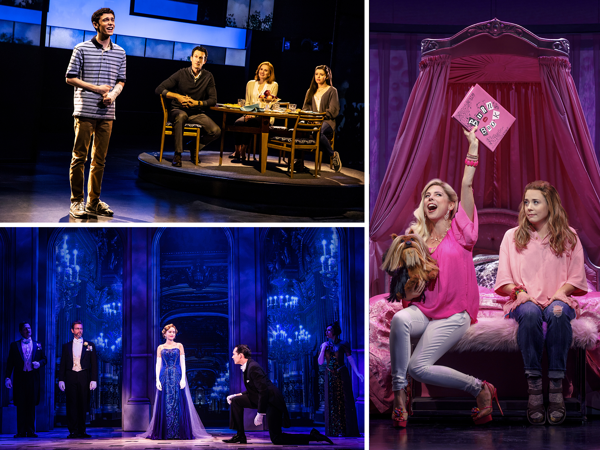 The biggest hits on the Great White Way are headed to New Orleans as part of the just-announced Hancock Whitney Broadway in New Orleans 2019-2020 season!

Broadway blockbusters Dear Evan Hansen, Mean Girls and Anastasia will be part of the upcoming season. The series will also include Wicked, A Christmas Story, The Musical, Miss Saigon, Roald Dahl’s Charlie and the Chocolate Factory and Fiddler on the Roof.

Learn more about all of these exciting stage hits below!

WICKED
October 2 – 20
So much happened before Dorothy dropped in. Wicked, the Broadway sensation, looks at what happened in the Land of Oz…but from a different angle. Long before Dorothy arrives, there is another young woman, born with emerald-green skin—smart, fiery, misunderstood and possessing an extraordinary talent. When she meets a bubbly blonde who is exceptionally popular, their initial rivalry turns into the unlikeliest of friendships…until the world decides to call one “good,” and the other one “wicked.” From the first electrifying note to the final breathtaking moment, Wicked—the untold true story of the Witches of Oz—transfixes audiences with its wildly inventive story that USA Today calls “a complete triumph! An original musical that will make you laugh, cry and think.”

DEAR EVAN HANSEN
November 5 – 10
Winner of six Tony Awards, including Best Musical! A letter that was never meant to be seen, a lie that was never meant to be told, a life he never dreamed he could have. Evan Hansen is about to get the one thing he’s always wanted: a chance to finally fit in. Dear Evan Hansen is the deeply personal and profoundly contemporary musical about life and the way we live it. Dear Evan Hansen has struck a remarkable chord with audiences and critics everywhere, including The Washington Post, who says Dear Evan Hansen is “one of the most remarkable shows in musical theatre history.” The New York Times calls it “a gut-punching, breathtaking knockout of a musical.” And NBC Nightly News declares the musical “an anthem resonating on Broadway and beyond.” Dear Evan Hansen features a book by Tony Award winner Steven Levenson, a score by Grammy, Tony and Oscar winners Benj Pasek and Justin Paul (La La Land, The Greatest Showman) and direction by four-time Tony Award nominee Michael Greif (Rent, Next to Normal).

A CHRISTMAS STORY, THE MUSICAL
December 17 – 22

MISS SAIGON
January 21 – 26, 2020
Experience the acclaimed new production of the legendary musical Miss Saigon! From the creators of Les Miserables, this is the epic story of a young Vietnamese woman named Kim who is orphaned by war and forced to work in a bar run by a notorious character known as the Engineer. There she meets and falls in love with an American G.I., an encounter that will change their lives forever. Featuring stunning spectacle and a sensational cast of 42 performing the soaring score, including Broadway hits like “The Heat is On in Saigon,” “The Movie in My Mind,” “Last Night of the World” and “American Dream,” this is a theatrical event you will never forget.

MEAN GIRLS
March 17 – 22, 2020
Direct from Broadway, Mean Girls is the hilarious hit musical from an award-winning creative team, including book writer Tina Fey (30 Rock), composer Jeff Richmond (Unbreakable Kimmy Schmidt), lyricist Nell Benjamin (Legally Blonde) and director Casey Nicholaw (The Book of Mormon). Cady Heron may have grown up on an African savanna, but nothing prepared her for the vicious ways of her strange new home: suburban Illinois. Soon, this naive newbie falls prey to a trio of lionized frenemies led by the charming but ruthless Regina George. But when Cady devises a plan to end Regina’s reign, she learns the hard way that you can’t cross a Queen Bee without getting stung. New York Magazine cheers, “Mean Girls delivers with immense energy, a wicked sense of humor and joyful inside-jokery.”

For more information about the series and the benefits of being a subscriber, click here.