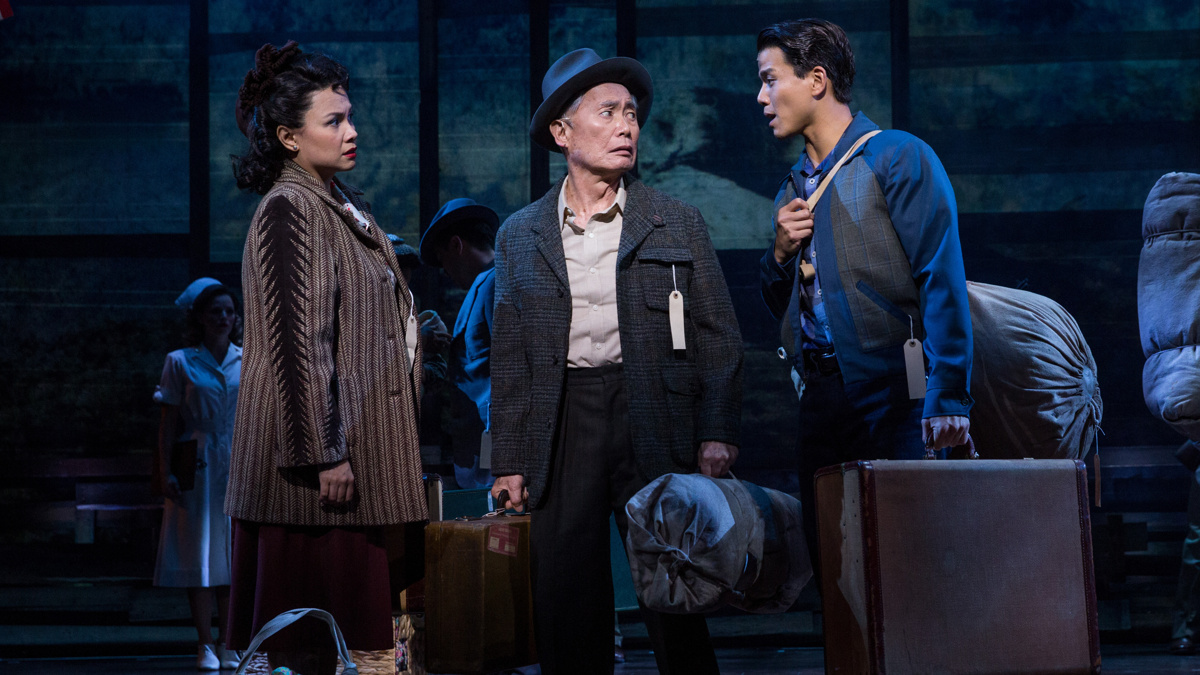 George Takei & Telly Leung Revisit Allegiance in London
George Takei and Telly Leung will make their London stage debuts in the U.K. premiere of Allegiance at the Charing Cross Theatre from January 7, 2023 through April 8. They will recreate the roles of Sam Kimura and his younger self, Sammy, which they originated on Broadway. This production will be directed and choreographed by Tara Overfield Wilkinson. Based on Takei’s childhood experience in a Japanese-American interment camp, Allegiance features music and lyrics by Jay Kuo and a book by Marc Acito. A story of family, love and patriotism set during World War II and beyond, the show follows veteran Sam Otsuka and his sister Kei as they find themselves torn between loyalty to their family and allegiance to their country. Additional casting will be announced later.

London’s Moulin Rouge! Welcomes New Bohemians
The West End’s Moulin Rouge! The Musical will welcome a new cast of bohemians and aristocrats as the musical enters its second year at the Piccadilly Theatre in London. Beginning on October 17, the cast will feature Melissa James as Satine, Jamie Muscato as Christian and Matt Rixon as Harold Zidler. They will be joined by Ian Carlyle, who remains with the cast and takes over the role of Toulouse-Lautrec, Ben Richards as The Duke, Elia Lo Tauro, who continues to play Santiago and Amy Thornton, who continues with the cast and steps into the role of Nini, with Tiago Dhondt Bamberger as Baby Doll, Hannah Jay-Allan as Arabia, Elliotte Williams-N’Dure as La Chocolat and Tanisha Spring, who will continue serve as the Satine alternate. The cast will also include Michael Afemare, Yandrick Agius, Femi Akinfolarin, Ollie Augustin, Will Bozier, Robson Broad, Jonathan Cordin, Anthony Cragg, Katie Deacon, Fletcher Dobinson, Taofique Folarin, Honey Joseph, Alicia Mencía Lopez, Georgia Morgan, Nathaniel Morrison, Melissa Nettleford, Alice Readie, Ben Rutter, Craig Ryder, Elly Shaw, Tinovimbanashe Sibanda, Misty May Tindall, Jon Tsouras, Lily Wang and Jason Leigh Winter.

Olivier-Nominated The Choir of Man Makes West End Return
The Choir of Man is set to return to the West End, beginning performances at the Arts Theatre on October 1, with opening night scheduled for October 13. A celebration of community and friendship with something for everyone—including free beer—the 90-minute show includes hits from artists such as Queen, Luther Vandross, Sia, Paul Simon, Adele, Guns & Roses, Avicii, Katy Perry and more. The cast will feature Michael Baxter as The Maestro, Ben Norris as The Poet, Levi Tyrell-Johnson as The Hardman, Owen Bolton as The Beast, Jordan Oliver as The Handyman, Lemuel Knights as The Barman, Matt Beveridge as The Romantic, Matt Nalton as The Pub Bore and Matt Thorpe as The Joker. Completing the company are Mark Irwin, Sam Ebenezer, Gavin Ryan and Lucas Koch.