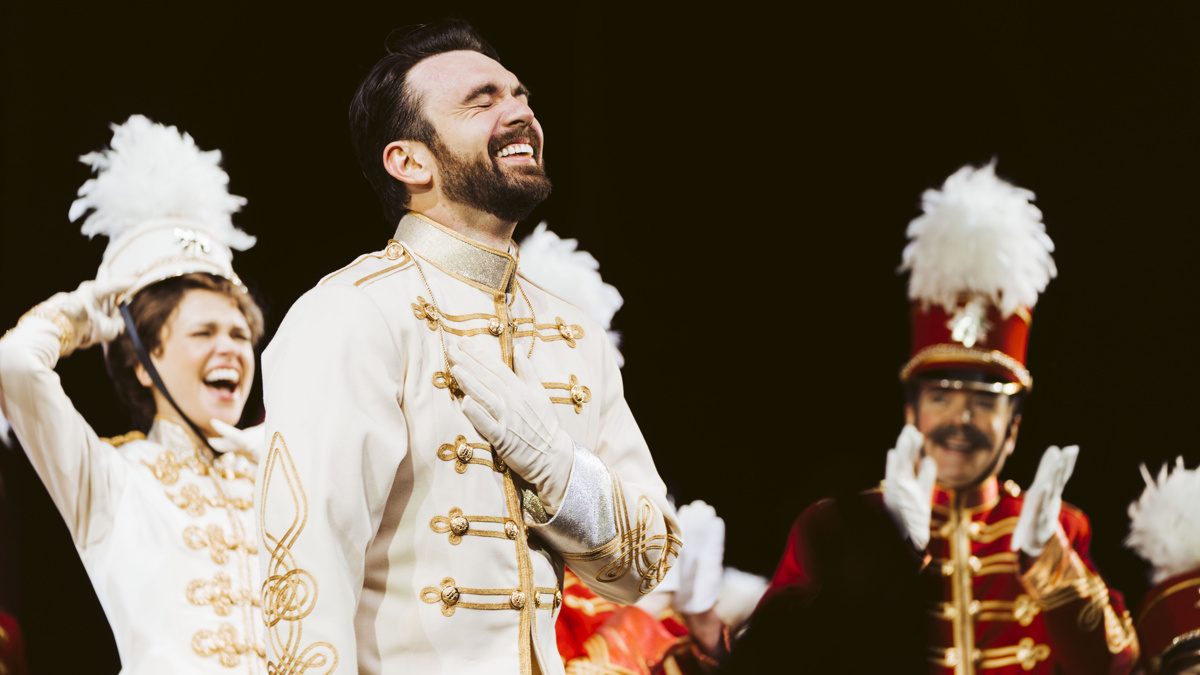 On June 13, mere hours after his partner Matt Doyle won a Tony Award for his performance in Company, Max Clayton got a call saying that he would be starring in The Music Man as Harold Hill the next day. The show’s star Hugh Jackman, had tested positive for COVID and as his standby, Clayton would be making his debut in the leading role alongside two-time Tony winner Sutton Foster. Currently playing the role through June 21 while Jackman recovers, Clayton caught up with Broadway.com about the “full-circle” moment of taking center stage in the musical revival.

What was Clayton doing when he got the call saying he was stepping in for Jackman? Surprising his mother in New Hampshire. “I went to the Tonys on Sunday and got to celebrate my partner, Matt Doyle, winning which was totally the greatest night of both of our lives,” he said. “I got one hour of sleep and then got on a train to go home to surprise my mom at her retirement party. It wasn’t until that evening on Monday when I looked at my phone and I had multiple missed calls and texts from our producer. I called her back and that is when she told me that Hugh had tested positive and that they planned to put me on. It was too late for me to get on a plane or train back to New York, so I stayed at home and then I woke up early the next morning and took a train back in Harold Hill fashion. I went right to the theater to run some things on stage. Just insanity.”

Clayton joined the production in 2019. He played Harold Hill during the developmental lab since Jackman was unavailable. “It was this incredible collaboration with all of the creative departments and a small cast,” he said. “Most of the Harold Hill choreography that you see in the show was built on me. During the lab, I had a chance to work and dance with Sutton Foster and that’s when I fell in love with her. She approaches everything as an actor first and I’ve never felt so safe on a stage in my entire career. During my first performance with her—whenever I found myself feeling stressed or overwhelmed—her eyes were my safe zone. I’ll forever be thankful for her.”

Doing the lab wasn’t the only thing on Clayton’s schedule, he was still performing nightly as part of the ensemble in the Tony-winning Moulin Rouge! The Musical. “I was doing double-duty as Harold Hill during the day and performing Moulin Rouge! at night,” he said. “I’ve never worked so hard. I withered away. It was the most insane time and I think that everyone in both companies will forever remember that period for me.”

On June 14, Clayton took his first bow as Harold Hill. “It’s been mind-blowingly full circle. My whole journey with The Music Man has been pretty special,” he said. “I never imagined I would be Hugh Jackman’s standby while I was creating it. I still get emotional when I think about it. This is my eighth Broadway show, and I’ve understudied the lead in almost all of the shows I’ve been in. What’s really wonderful about this bizarre time is that shows and audiences are finally recognizing the hard work that swings, understudies and standbys put in to quite literally keep Broadway open. I know it’s our job, but it’s certainly not easy getting thrown on without the muscle memory of doing your show time a week. I was overwhelmed, and I was proud knowing that I was supported by my company.”

With a week’s worth of performances under his belt, Clayton is looking forward to continue to lead the show through June 21. “I feel like I’m able to find my groove,” he said. “Which is such a luxury as a cover. Obviously a beast of a role like Harold Hill would take even far longer than a week. Sutton and I met before our first show and, you know, she’s been understudy. She understands what I’m going through. She has been there holding my hand, supporting me every step of the way. I’m having the best time.”

Watch Foster’s touching tribute to Clayton after his first performance below!